Ever feel like you can’t have what you want? This is why

So have I. It sucks.

However…after thinking long and hard about this feeling (because I was so tired of feeling it), I realized that it’s caused by two factors:

(These are actually related to each other.)

I used to feel like all the things that I really wanted I couldn’t get. And I would worry and stress over how and if I would ever get there.

Turns out, I wasn’t living in the now when it came to getting those goals, and that was one of the things that was both preventing me from actually achieving them and causing those painful feelings of “Why I can’t I have what I want?!?!”.

To understand exactly how this works, let’s step back and take a hard look at what it takes to achieve a goal…without relying on “luck”.

This is how you achieve a goal:

I was pretty terrible at this and had it wrong in a bunch of different ways.

Here’s where I was messing up:

#1 and #2 are just bad goal setting on my part — this is very important, for sure, but a separate topic. We’ll cover this one at some point.

But #3, #4, and #5 definitely take you out of living in the now. Because you’re living in your dream for the future, but it doesn’t mesh with reality, so it makes you feel bad. This stops all progress towards actually achieving that dream.

When you do these things, what happens is the negative emotions that you feel from them end up taking control of your “now”.

Think about it…when you obsess about the things I mentioned above, it makes you feel crappy. And when you feel crappy, you either don’t take the actions you need to take (it lowers your productivity) or you just don’t work as well.

Let’s say you find yourself dwelling on #4. You’re feeling frustrated with your current situation in life, and thinking about how far away you are from your goals. (I think we’ve all felt this way at some point right?)

How does that feel? Feels pretty bad right?

So what do we do when we feel like this?

The next thoughts that are triggered, as a result of these feelings of “I’m so frustrated with where I’m at now”, usually sound something like…

Then these thoughts make us feel even worse. At this point, we’ve decided in the moment that our goal is pretty unattainable for us, our plan is worthless, and we’ll never reach it. So, at least for now (hopefully it’s just for now!) we stop working on our plan. And when you stop taking action, that’s what really causes you to be “stuck” and not have what you want.

When you take a step back to look at what happened in that situation (I think we all have been there at some point), you can how your focus shifted from in the now to obsessing about the future.

(See the irony here? We feel bad because we’re not where we want to be, but those feelings stop us from doing exactly what we need in order to get there)

I actually didn’t really start off this example by saying it, but we’re assuming here that you were perfectly fine and completely living in the present before you started dwelling on how far away you are from your big, eventual goal (or even a smaller goal for that matter).

That shift to dwelling on the future goal was a big shift in your focus (focus is one of the core Mindset components we teach). And THAT caused those negative feelings to cascade down, resulting in you feeling pretty bad, and not taking the actions you needed to take (which is exactly what would help you actually get closer to your goal).

Here’s another example that might make this a bit clearer.

You’re at the very bottom of a big staircase, looking all the way to the top. It’s so high you can’t really count the steps. Definitely a little daunting.

However, this is just a staircase! You know how to get to the top…

All you have to do is get started on the first step, and go up one step at a time. Sure, you can look up towards the top of the staircase, but your primary focus always has to be on finding the next step.

If you actually shift your focus by thinking about the top step (and away from the next step), you’re not focusing on the now anymore. The now is the step you’re actually on in the moment. The top step is the step you’ll be on in a minute — that’s not now!

And with your focus on the top step and not the next step…you might stumble!

It’s the same concept when achieving your goals. Don’t get tripped up by losing focus on the now.

Here are a couple places where we often stumble, taking us out of the now:

2. Not controlling our desire to learn new things. It’s natural to always want to make sure that we’re doing the best things you can, and that we’re not executing outdated techniques.

Also…proven techniques rarely become outdated. Sure, things like mediums of communication might change (like new social network apps coming out and gaining scale), but the principles remain the same. So make sure you’re executing based on principles!

2. Worrying about situations that haven’t even happened yet. One other trap that is really easy to fall into (and kind of fun/weird to think about) is obsessing about about actions that you would take IF you were at a certain level. But you’re not at that level yet.

So, these aren’t the actions that you need to take NOW and that isn’t what you need to focus on right now. You’re trying to live in an imagined future by thinking about it now. But that’s not what actually makes that future become a reality. Creating a plan that leads up to that future and executing it by living in the now and taking actions defined by your plan is what makes it a reality.

A quick note on goal setting

If you’re setting short-term goals that are small enough (meaning they won’t take you more than a couple months to complete), you’ll have time to evaluate new tactics to incorporate into your plan when you achieve the next goal. So just wait until then, so you can keep your focus 100% on doing what is necessary to complete your immediate goal — then re-evaluate if you really want to.

How To Handle Failure

Ok, I still haven’t covered #6 from the list of areas where I was messing up above.

“How to handle failure” is actually a HUGE topic that warrants its own detailed guide such as this one (note to self: do a big post on this topic!). However, I’ll do my best to provide a quick overview of what you need to do in order to overcome failure.

However, first it’s really important to understand exactly why this is so important. Let’s take a look at exactly HOW not being able to handle failure correctly leads to this problem of feeling like you can’t have what you want:

(Stick with me here)

Can you see how that works now, from start to finish? That’s exactly why handling failure is so important, so #3 above will instead look like “You WON’T give up, you’ll just come up with a way to overcome that one problem, and you’ll continue working on your plan”.

So how do you handle failure well?

Again, this is a huge topic that warrants its own dedicated guide. However, now that we understand how this process happens, we can look at a couple ways to overcome failure and bounce back so you don’t end up at #5 above!

Failure sucks, yes. But it’s necessary, and the sooner you can learn how to handle it (and be OK with it), the sooner you’re going to reach your dreams. And kick that pesky “I can’t have what I want” feeling in the face.

Action Items For You:

Ok, you’ve made it this far.

The key is to be honest here. We all KNOW we shouldn’t be doing this, but I think we all do it more than we realize (and admit). Once you realize this, you can practice letting go of these feelings.

2. Do you have a habit of delaying happiness? Thinking “I’ll be happy when” or “once I get X I’ll do Y”?

This means you’re putting your happiness off until an imagined future, but happiness in the now is one of the key ingredients for being able to execute on a plan to transport you to that future. Unsurprisingly, this makes it hard for you to live in the now!

3. Don’t get confused about what actually IS living in the now.

This is key! It isn’t apparent (especially B) so PAY ATTENTION!

Let’s play a little game. For each of the scenarios listed below, is it an example of living in the now or not?

A. Spending time creating a plan for your immediate future.

This IS living in the now because it’s applying focus in the present time to develop what you need in that moment — a plan. Even though the plan is still associated with the future, you have to live in the now in order to develop that plan.

B. Spending time thinking about your current problems

This is NOT living in the now.

Confused? Think about it this way — your current situation is due to the actions you took or things that happened in the PAST. So here, you’re really living in the past rather than the present.

(What would be living in the now if you’re in this situation? Doing something to improve the way you feel about these problems because that helps you get into situation A — creating a plan for your future to solve this problem)

C. Spending time worrying about “what if’s” and dreaming up problems that might happen in the future

(Not to confuse things, but this one can be slightly nuanced as well. Spending focus time during your planning sessions, as in example A above, anticipating problems that might come up and brainstorming solutions ahead of time is fine. Just don’t obsess over it to where it robs your focus after your planning session.)

4. For the love of all that’s good, work on how you handle failure

This is so key for success in general. So please scroll back up to the section titled “How To Handle Failure” and read it again. It’s really important.

That feeling of “I can’t have what I REALLY want” is so painful, and I hate that feeling. I want to eradicate it from humankind.

However… in order to do that I need YOUR help:

If you liked this post and found it to be valuable, please share it with your friends!

There might be someone out there who would really find inspiration from this post, so make sure you share it out so they can kick that “I can’t get what I want” feeling where it hurts. 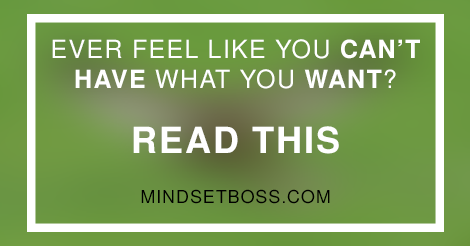 Ever feel like you can’t have what you want? This is why

I used to feel like the more I wanted something, the more I couldn't have it. Read this post to discover what causes this feeling and how to overcome it.

One of the most important things when learning ANYTHING is the ability to see examples of what you’re trying to learn in action. Oddly enough, a great source of such examples can be reality TV….

Join me and get all my best learnings!